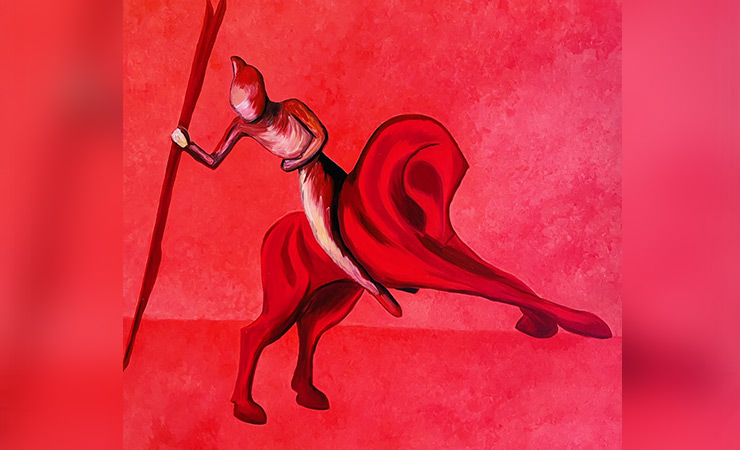 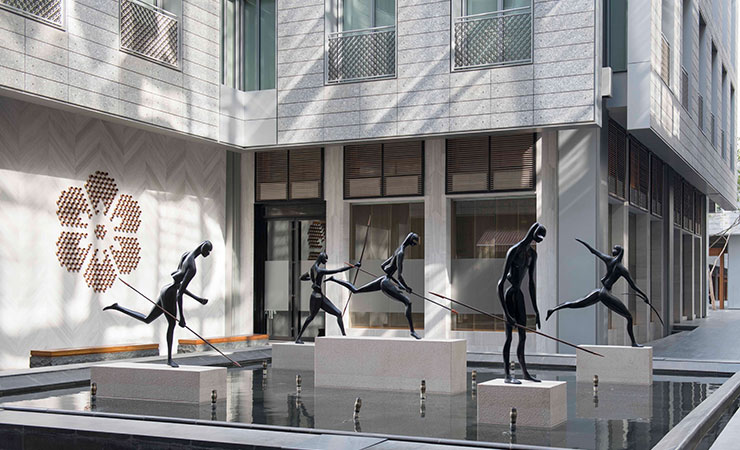 A work by Antonio Signorini in action.

His nine-year artistic practice has taken Signorini on a quest to understand ancient cave art and translate the archetypal human journey into dynamic three-dimensional sculptures. Having received a local residency in the UAE, he splits his time between a bustling foundry in Florence and his art-filled flat located in Palm Jumeirah, Dubai.

His solo exhibition at Oblong Contemporary marks the first-time figures from “The Warriors” and “The Dancers” series are being shown together in the Emirates. “The melodious interaction in one space, brings about a balance of masculine and feminine energy,” says the gallery.

“A yin and yang perfection, so to say.” “To me, this a big thing,” Signorini says. “From the beginning, I’ve always imagined presenting them as one complete artwork; but I’ve never shown them together until now.”

Viewers experiencing the unpredictable peaks and valleys of being human, will resonate with the sculptures on an active molecular level.

In every culture, the horse symbolises a distinct form of unparalleled power — from wealth and freedom in Native American lore, to the animal embodiment of grace and elegance in ancient Arabian civilisation. The “Flying Horses” appearing at Oblong Contemporary introduce a bespoke new white patina — a mixture of ceramic paint and marble powder — which has been added to the bronze.

Signorini says that “the ceramic paint is also used for aircrafts and supercars. It absorbs into the pores of the bronze and seals them. The sculptures are not only a perfect white, but they are beautifully smooth to touch.”

The works of Antonio Signorini on display.

The horses are not shackled to traditional gallery plinths; instead, they appear to float over a stainless-steel pedestal, as though in mid-gallop across the ever-shifting sand dunes that lie in wait just beyond Dubai’s dazzling urban sprawl. Signorini grew up in Tuscany, an area famous for art and culture and close to Pietrasanta, considered as the world’s capital of marble working. He remembers that “as a kid, I would stand on our apartment balcony and look across at the mountains and ask my mom why I could see snow on them even in summer. Eventually, I learned that the snow was actually marble.”

He yearned to sculpt from that moment, and waited for his opportunity. Following a successful career in the fashion world, he ultimately followed his heart and forged his own artistic practice. He is drawn to create three-dimensional figures in bronze, and each of his unique, structurally complex pieces can weigh upwards of 78 kilograms.

“I’ve never been the kind of artist who has to meditate in the desert to find my inspiration,” he confesses. He gets his ideas by working, making mistakes, experimenting, and travelling. While in Gibraltar to see the beautiful underwater caves, Signorini read a newspaper article about the newly discovered Saruq Al Hadid archaeological site and also about the allied Museum in Dubai — and immediately planned a visit. Saruq Al Hadid is an archaeological site in Dubai, which is one of the most important and enigmatic historical sites in the country.

Findings from the site are displayed in a museum with the same name in Dubai. The site was originally discovered by the Ruler of Dubai, Sheikh Mohammed bin Rashid Al Maktoum, while flying his helicopter across the desert. Signorini expected to encounter a glitzy and impersonal stopover metropolis in Dubai — but instead was instantly deeply fascinated by the desert environment and the country’s history. “For a year, I was only with the people studying the artifacts, the desert sights, the mountains of Ras Al Khaimah,” he recalls. He was honoured when soon after, several sculptures from “The Warriors” series were acquired by Dubai International Financial Centre and permanently installed as outdoor public art for all who work, live and play in that neighbourhood. “Art is the universal language that brings all people together,” says Signorini. Each of his “Warriors” crouch, leap, or lunge with the soulful momentum that is at the root of the artist’s practice.  Says he: “Life is movement. The Earth turns at a constant speed of 1,670 km/h. Nothing, not even a statue, is static. Those figures don’t stop. They are not fighting, but actually journeying onwards to face down issues that lie in wait just ahead.”

Established in 2019, Oblong Contemporary collaborates with talents by providing them a local and international platform and by ensuring value across its location in Dubai and Forte dei Marmi, a sea town in northern Tuscany (Italy). (In Italian, Forte dei Marmi means “Fort of the Marbles”). The town takes its name from the fortress that rises in the middle of the main square. It was built to defend the coast from outer attacks; but in the 19th and the beginning of the 20th century, it became the place where the marble quarried from the Alpi Apuane (they are the same mountains of the famous marble of Carrara) was stocked before being sent to the pier for shipping. As a gallery, Oblong aims to be committed to representing a successful arena for culture, functioning as a bridge between Italy and the UAE.