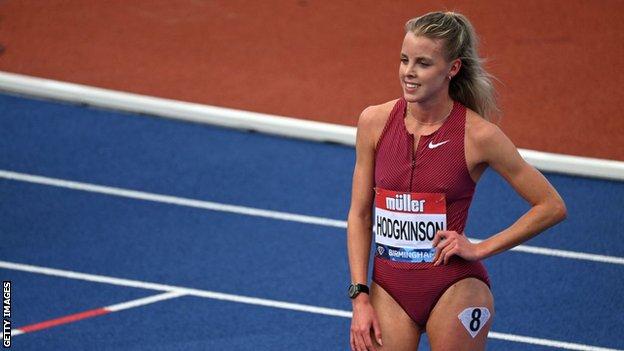 Olympic silver medallist Keely Hodgkinson says she wants to be a dominant force on the Diamond League circuit as she takes on a strong field at the Prefontaine Classic in Eugene.

"Last year was my first year on the Diamond League circuit racing senior girls and there were a few fourths and fifths in there," said the 20-year-old.

"Running that one minute 55 seconds and winning Olympic silver, I should be expecting more of myself."

American Athing Mu, who beat Hodgkinson to gold in Tokyo, has withdrawn from the event, but the home challenge is led by Olympic bronze medallist Raevyn Rogers, world indoor champion Ajee Wilson and Allie Wilson, the fastest woman in the world this year.

"It is pretty much a world final, a nice early-season world final, but I think it is going to be a lot of fun, I am looking forward to it," said Hodgkinson.

The Hayward Field venue will also host July's World Championships, giving Mu and Rogers, who competed there as a student athlete for University of Oregon, home advantage.

"I guess so," was Hodgkinson's response when asked if she was ready for the partisan crowd.

Jamaican world 100m champion Shelly-Ann Fraser-Pryce is running in the 200m, rather than a stacked race over the shorter distance that contains her compatriot and Olympic champion Elaine Thompson-Herah, Britain's Dina Asher-Smith and American Sha'Carri Richardson.

The 35-year-old, who is the fastest women in the world this year after clocking 10.67 second earlier this month, is assured of her place in the World Championship 100m field as a defending champion.

She said she was still undecided about whether she would double up with the 200m at Oregon, unsure if her body could withstand the strain.

However, she added that overturning preconceptions through her return to the top level after giving birth in 2017 continued to be a strong motivating factor.

"For a lot of us it was unheard of to be an athlete, start a family and come back," she said.

"Motherhood doesn't limit you, if anything it enhances your performance and gives you that extra push to show the world that as women, we don't like to be put in a box.

"I'm glad I was able to do it, it wasn't easy, the more women see the more they know you have options."