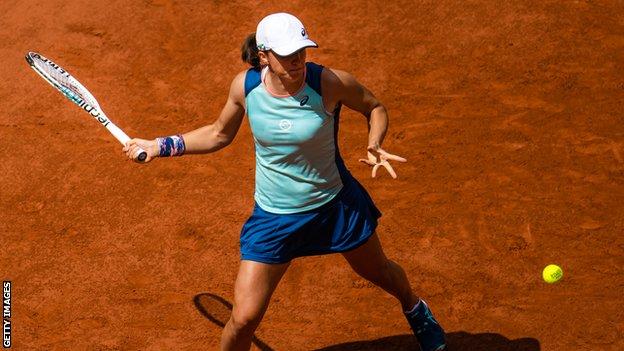 Hot favourite Iga Swiatek came through her toughest test yet to reach the last 16 of the French Open women's singles.

World number one Swiatek earned a 6-3 7-5 victory over Montenegro's Danka Kovinic on the Paris clay.

While not reaching a level as high as her previous two victories, the 20-year-old from Poland still had too much quality for the world number 95.

The 2020 champion, who extended her winning streak to 31 matches, has not yet faced a seeded player at Roland Garros this year.

"I wanted to play aggressively and sometimes I thought I was putting in too much power. Sometimes it was hard to control at full speed," said Swiatek, who had her serve broken three times by Kovinic.

"I tried to play with less pace and be more consistently in the rallies. She did a good job at defending, hitting back at full speed."

After rapid wins against Ukraine's Lesia Tsurenko and Alison Riske of the United States, the match against Kovinic required a little more problem solving.

The 27-year-old Montenegrin is an aggressive baseliner who managed to push Swiatek back more than her earlier opponents, forcing the top seed into making more mistakes than she previously had.

That first became evident in a second game where wayward hitting contributed to Swiatek not taking her first four break points.

The pressure eventually told on Kovinic as Swiatek broke and then led 3-0, although she did not run away with opening set as those watching on Court Philippe Chatrier would have imagined she might.

Four more unforced errors from her usually infallible forehand handed the break back to Kovinic for 4-3, but her ruthlessness returned to regain the lead in the next game and serve out the opening set.

There were more problems in the second set.

After leading 4-1, Kovinic fought back with four games on the bounce - including two breaks - as she put pressure on Swiatek's second serve and reaped the rewards.

However, she lost serve at 5-5 from 30-0 and Swiatek served out the match to reach the second week of a Grand Slam event for the eighth time in the past nine majors.