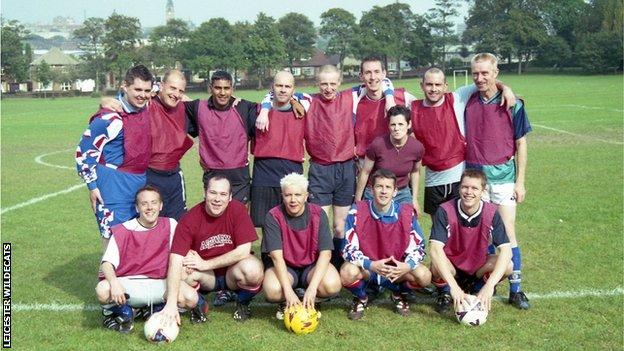 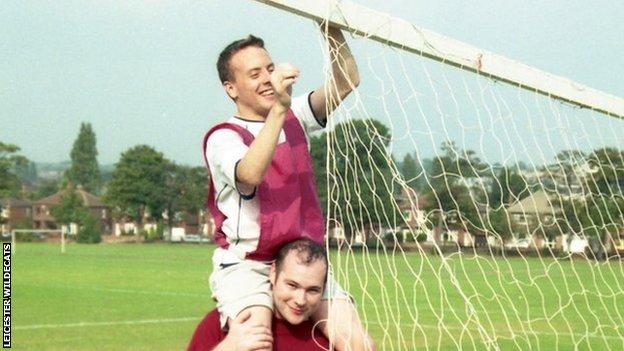 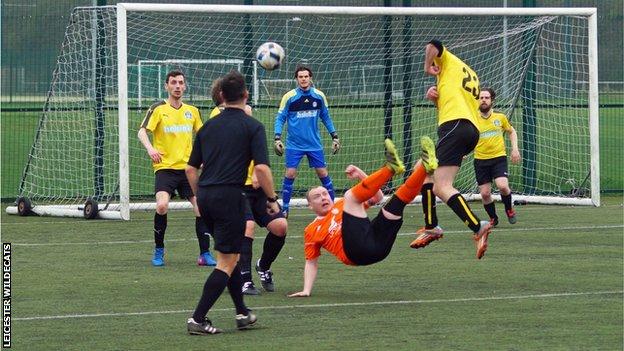 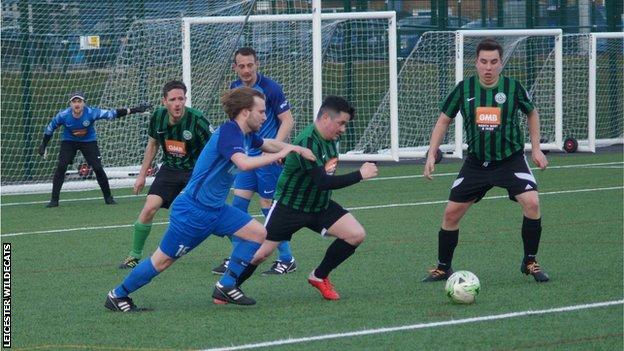 At the turn of the century, homophobia in English football was commonplace.

The suicide of Britain's first openly gay professional footballer, Justin Fashanu, in 1998 was fresh in memories.

Yet still there seemed to be an attitude that abuse was acceptable. Liverpool striker Robbie Fowler admitted as much when, years later, he apologised for homophobic comments towards Chelsea's Graeme le Saux in 1999.

It was against this troubling backdrop that the Gay Football Supporters' Network (GFSN) was first formed. Its initial purpose was to give gay football fans a space to meet and discuss the game they loved without fear of abuse or discrimination.

As the league celebrates its 20th anniversary, the landscape for LGBTQ+ footballers and football fans is markedly different - although the ethos of the league remains the same.

The GFSN League is a unique competition - it is the only national LGBTQ+ football league in the world.

It has the specific aim of providing a safe and inclusive place for anyone to play football, regardless of age, gender and sexuality. Being a mixed-gender competition, it also provides an environment for trans people to play competitive football without issue.

Founded in 2002 with four teams, it now boasts 17 sides across two divisions, with several more taking part in the international GFSN Cup.

In last season's cup final, Village Manchester beat Dublin Devils at the home of Shelbourne FC - the first time the final has ever been played at a men's professional league ground.

'They expected us to be prancing around in high heels'

Mike Kalogerou, who is chair of the GFSN, has played for Wildecats since 2009.

A 39-year-old Grimsby Town fan, he says it is a "privilege" to be in charge of the league as it reaches a landmark.

Landmark moments like Blackpool striker Jake Daniel's decision to come out as gay while an active Football League player, or the intense scrutiny of Qatar's treatment of gay people before it hosts this winter's World Cup may suggest that being LGBTQ+ in football is not such a taboo issue.

And Kalogerou says he is often asked what role the GFSN League realistically serves in the modern day. But he has a robust answer.

He tells BBC Sport: "Straight people often ask: 'Why are you bringing sexuality into football?'

"The fact is, sexuality is invisible, so people do not filter themselves. On the terraces, people will shout the worst kind of homophobic abuse at players. You hear it everywhere, from national stadiums to grassroots games.

"How can we expect people to enjoy the game when this stuff is happening?

"Just have a listen when you next go to an English league game, or in the pub afterwards. Then you will understand why the GFSN exists."

But going back to that first game 20 years ago, the beginnings were hardly auspicious.

Though the Terriers lost it was they - through Ian Collins - who scored the league's first goal. Historic? Yes. Glamorous? Far from it.

Collins - a landlord of a pub in Beal, near Pontefract - says: "It was a complete and utter mudbath. You had mud over the top of your boots, but Leicester had travelled and we wanted to play. Any other game, against a local team, would have been postponed."

Steve Niblett, who had joined Wildecats earlier in 2002, has similar memories of a stereotypical Sunday league scene.

He says: "The changing facilities were rustic, shall we say - cold showers are a clear memory.

"But it was the social side which drew me to it. I remember the nights out - in my 20s, not long after coming out. It was great to meet players from across the country.

"The league was a real step forward. To have it structured was really exciting.

"It was not the most technical of leagues, but we had a real range of players - players aged 19, 20 up until their 50s."

Niblett, a Cardiff City fan who grew up in south Wales but moved to Leicester for university, is still playing for Wildecats.

The 46-year-old says: "The level of football has increased, it's a lot more competitive.

Despite those early difficulties, the league has survived and thrived.

Collins has donated his match shirt from the first game to the National Football Museum in Manchester, and has "the honour of being named on Wikipedia".

He has also seen how the league can change and challenge perceptions of men's football first hand.

He remembers inviting a group of heterosexual friends to watch a match in Ilkley and them asking which of the players were gay because they were "hard as nails".

"They realised we were serious about our football," adds Collins. "We can't half drink, we were as tough as nails, and they were expecting us to be prancing around the pitch in high heels.

"We were a team of ordinary guys who wanted to play football."

'Life is a series of adoptions. Terriers adopted me'

A big part of the league is the "spirit of the GFSN" - an ethos of inclusion and friendship, where everyone gets a chance to play.

It has also had the added consequence of bringing people together in a way they may not expect.

He lined up in central midfield for the Yorkshire side in that first game against a Wildecats team featuring Michael Hall.

Farrar and Hall met properly a few years later at an appropriately named GFSN Get Together, and have now been in a relationship for 16 years.

Farrar tells BBC Sport: "It never occurred to tell people [in football] I was gay. I had a reputation for being a combative player from a rough town in the mid-90s, and I was proud of that.

"The Terriers was such a sea change. It was about playing for the love of the game, about bringing people together. It was a relief, and made me more comfortable in myself.

"The biggest influence on my life was playing for Terriers. Life is a series of adoptions. You get adopted by people, groups, teams. Terriers adopted me and made me a more considerate, aware person.

"Obviously there's Michael, but there are other people from that first game I still talk to now. I made friends for life."

'The aim of the GFSN is not to have a GFSN'

So what comes next for the league as it celebrates 20 years?

Kalogerou wants to see expansion to all parts of the UK - there are no GFSN teams in East Anglia, for example, and only one in Birmingham, meaning he sometimes has to deliver bad news to hopeful players trying to find a league nearby.

He also wants to take the league international, with a GFSN All-Stars team at next year's Gay Games in Hong Kong.

Kalogerou is also targeting increased trans membership, at a time when trans participation in sport - especially regarding transgender women - is such a divisive and debated topic.

TRUK United, a team started and run by trans people, is entering GFSN competition for the first time this year, and Kalogerou views that as progress.

"The aim of the GFSN is not to have a GFSN. We want to break down all barriers to playing grassroots football. Is that realistic? Not in the short term," he says.

So equality in the game is a long way off - but a league that started as a kickabout between friends will continue to strive for it.