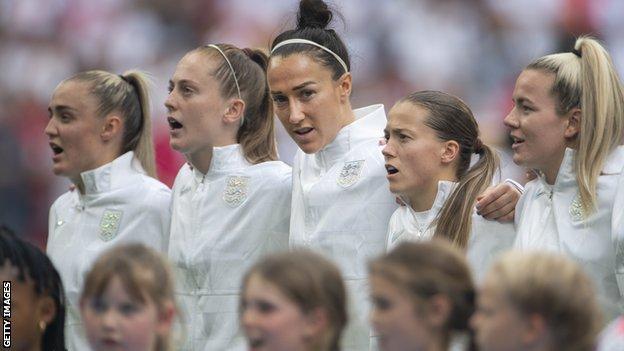 European champions England will play their final two games of 2022 against Japan and Norway in November.

The Lionesses' year began with victory in the inaugural Arnold Clark Cup in February, before winning Euro 2022 in the summer.

Sarina Wiegman's side became the first senior England side to win a major trophy since 1966 after beating Germany in the final at Wembley.

They will play Japan and Norway at the Pinatar Arena in Murcia, Spain.

Both countries have qualified for next year's World Cup in Australia and New Zealand, and England will face Japan on 11 November, before facing Norway four days later.

Those matches will follow home friendlies against world champions the United States at a sold-out Wembley, before hosting the Czech Republic in Brighton in October.

"I am really pleased we can continue to test ourselves against strong opposition, especially as we are fully focused on our preparation for the World Cup," said England head coach Wiegman.

"Japan are one of the best teams in Asia and offer a different style of play to what we are used to.

"Norway had a difficult summer, however they qualified directly for the World Cup and I am confident they will bounce back. They have always proven to be a strong opponent."

And Wiegman added: "The staff and players will look forward to welcoming Hege again.

"With both teams wanting to make a good impression as they build towards a major tournament, it will be a great opportunity to see where we stand.

"Furthermore, I hope a change of scenery and good climate for that time of year can contribute to keeping the players fresh after what has been an exciting and at the same time intense year for all."